I’ve always wanted a fireplace but oddly enough we never purchase a home that has one. Ironic. BUT with a little imagination and DIY, I can make it happen. (*cue mental image of Spongebob imagination rainbow meme) I am definitely drawn to the cottage style fireplaces, so today I am sharing all the inspiration I have gathered and my plans for our very own DIY cottage fireplace!

Where did this all start?

When we were in our first home, we had a long empty wall that was just begging for some type of focal point. We did a plank wall,  a piano wall, and even just the tv on an antique buffet. Nothing really felt right.

Then I had the fireplace idea.. I was beyond excited! I found a vintage fiberglass fireplace that I was going to use and add shelves on each side to make it look built in. We had everything ready to go and then…. we moved. Whomp whomp whomp.

Now in this house, I have the same idea but a different idea. The more I thought about it, I realized I am even more excited than I was for the fireplace in the old house because I feel like this idea fits my style so much more!

This fireplace has taken many forms in my head. Get ready for the rollercoaster as I give you a little peek into my mind.

This idea started out as a stone fireplace. I loved the idea of something more white/cream like this one.

But then I decided I wanted a stove heater. I mean, come on! They are so adorable and classic and cozy! I really liked how they looked in English cottages when they were inside fireplaces. Like these.

But I still wanted stone… Then I found this gem..

I was sold. I was done looking for the perfect inspiration. Only difference is I knew I wanted the stone to go all the way up but that wasn’t a big deal. And to make it even better she DIYed the stonework using airstone! I was like YES! Put this in my pipe and smoke it and then… airstone sold out or discontinued. Whomp whomp.

Welp on to the next idea, right?

After I found out stone wasn’t an option anymore, at least not affordably or diy friendly, I switched bases a little bit to brick.

I wanted something reclaimed and more small scale than your basic ranch style fireplace you see around here in Texas.

I found these and just lit up… How can you not?

Now these are beautiful. I love the signs of age on the brick but the thing is, that can’t be replicated. That specific texture is unique to that home, but I could try my best to get close.

When I was still on the stone idea I had reached out to Dana Dore, from Adored House blog, on instagram because the brick she used on her fireplace kind’ve looked like stone. I also loved her fireplace as well and it was one of my inspirations at one point because of the insert she used.

I love her mantel, no mantel thing she has going on here. I also like her garden shed fireplace.

This is gorgeous but I’m referring more to the shape than the stone. It’ll make sense when you see my plan, I promise.

Now these inspiration photos are cool. But they still weren’t perfect FOR ME. I needed to tweak it for what I wanted. Also it’s called inspiration for a reason, I was inspired. I didn’t want to be a complete copycat. (Copycat? What am I? 12 years old? YEP)

Now, when I wanted to do stone this was my plan.

Then I basically just changed that idea to brick, based heavily on the exposed brick fireplaces above.

I liked this but I wasn’t liking the simple shelf mantel on this one. All the inspiration photos I had of exposed brick fireplaces didn’t have a mantel, they just let the brick shine. Which I like, but what’s a girl to do about christmas stockings?

Now presenting… ledge style mantel, aka the solution to all my problems. Okay, so probably not all of them but at least the stockings one.

This is where the Joanna Gaines inspiration comes in.

Peep my attempt at landscape artwork! It actually turned out pretty decent, if I do say so myself.

Also, I ultimately decided that I really wanted the stove heater. I didn’t think the gas insert would look good with the color brick I chose.

Okay so I made a decision, when am I going to actually start on the fireplace in question? Soon, young padawan.

Thanks for stopping by,

Pin it for later 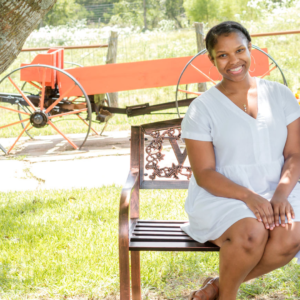 I’m De’Adrian, wife, mother of 3, and lover of home decor. I am pairing my big dreams with some realistic renovations to make this house our dream home. Follow along for creative home ideas every week! Read more about me here.